"I hate writing.  I love having written."  - Dorothy Parker

Many have appropriated this quote for their own purposes, including people who have taken "having written" as the title of their blogs.  Unfortunately, they got there before I did, because that was one of my original ideas for the title of this collection of jottings.  As the French say, That's Life.  (What, I had to translate it into French just because French people say it?)

The quote does bring forward, in that concise and humorous way that Parker was known for, a simple yet obstinate fact: writing is a bitch.  To say that writing is just following proper grammar (no, not Kelsey) is to say that the art of painting is nothing more than making sure your colors don't clash with the wallpaper.  So much more is involved, that to detail all of it could (and has) taken up entire careers of people much smarter and more insightful than myself.

How about another analogy?  When building a house, a contractor just has to make sure the building doesn't fall down.  The architect has to make sure the building speaks to the world, and in doing so says more than just "this is a constructed enclosure in which people hang around."  Writing, like many other disciplines, has a technical side and an artistic side.  If you want to know about the technical side, plenty of resources are available, but any writing adviser worth their salt should steer newbies to the classic by Strunk and White.  That book is one slim volume, and will stand you in good stead as far as where to place your comma and such.  Talking about the artistic side of writing could fill entire libraries.  To be continued, then. 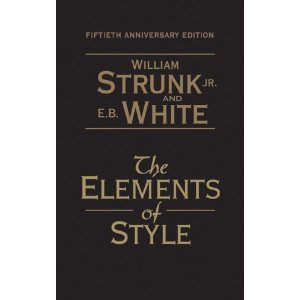 http://amzn.to/lFNZyZ
Posted by Scott Mercer at 12:54 PM No comments:

Just my own adaptation of the quote from Nietzsche about staring into the abyss.  Things around here will certainly NOT rate that high on the nihilism meter, so I apologize for the faulty first impression.  Allow me to explain.  That quote from good old Freddy N. has been translated into English in a  number of different ways, but is usually thought to mean something along the lines of "be careful that you do not become what you are fighting against."

Writers wage daily a battle of creation against chaos, order versus entropy, and a struggle to make something laudable out of nothing more than a few synapses firing.  This struggle represents for many a stab at something close to immortality in a fleeting, ephemeral world.  No one should doubt its status as a very human impulse.  Perhaps, if the reader will forgive the narcissism, the most human impulse.

The whole idea of writing probably started with the first voluntary activity ever taken up by humanity: sitting around the fire at night telling stories.  (I would contend that earlier activities, such as breathing, eating, drinking, hunting, mating, and fighting, are all of an involuntary nature.)  Writing is what I do.  It is what I would be doing even if I didn't get paid to do it.  And I usually haven't.

So, I will use this forum for assorted musings about laying words down, whether it be on a computer screen or on a piece of a dead tree.  Tips, reviews, predictions, rants: all of those and more will grace this space.  But fair warning: if you read them, you might actually learn something.
Posted by Scott Mercer at 3:37 PM 1 comment: